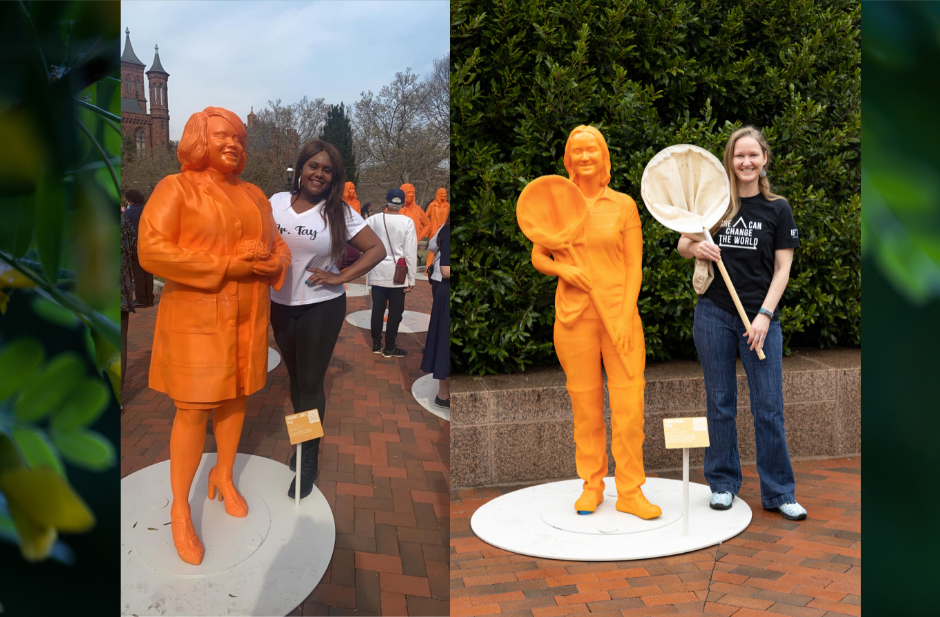 It’s a sunny Spring day on the National Mall in the heart of Washington, DC. 120 life-size statues bring pops of bright orange to the Smithsonian Gardens and the Arts and Industries Building. 90 women in STEM sit or stand side-by-side with their 3-D printed statue-twins. People of all ages fill the space, brimming with curiosity and crowding around each woman to ask her questions.

This was the scene at the opening day of #IfThenSheCan – The Exhibit, an installation presented by Lyda Hill Philanthropies’ IF/THEN® Initiative and displayed in Washington, DC in partnership with the Smithsonian Institution. The exhibit makes history as “the largest collection of statues of women ever assembled together,” installed for Women’s Futures Month, the Smithsonian’s forward-looking take on Women’s History Month.

Among the history-making women are two AWIS members: Lataisia Jones, PhD, a neuroscientist and STEM diversity advocate, and Ronda Hamm, PhD, an entomologist and educator. Both are part of the AAAS IF/THEN® Ambassadors Program and participated in the opening weekend at the Smithsonian. We asked Drs. Jones and Hamm what it was like to be part of this unique event. 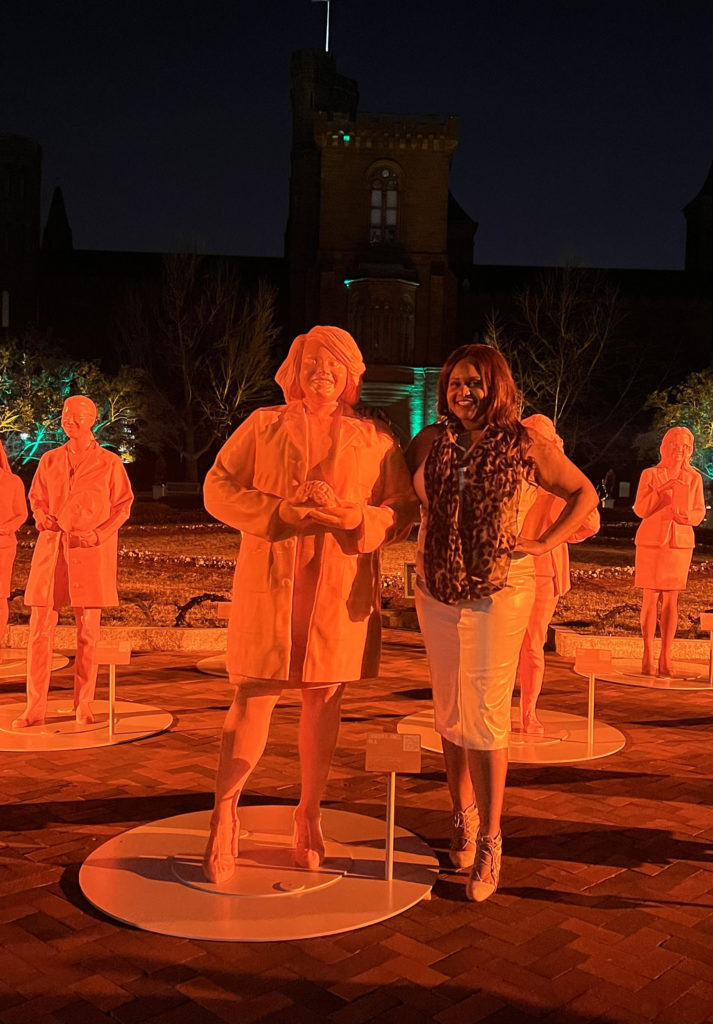 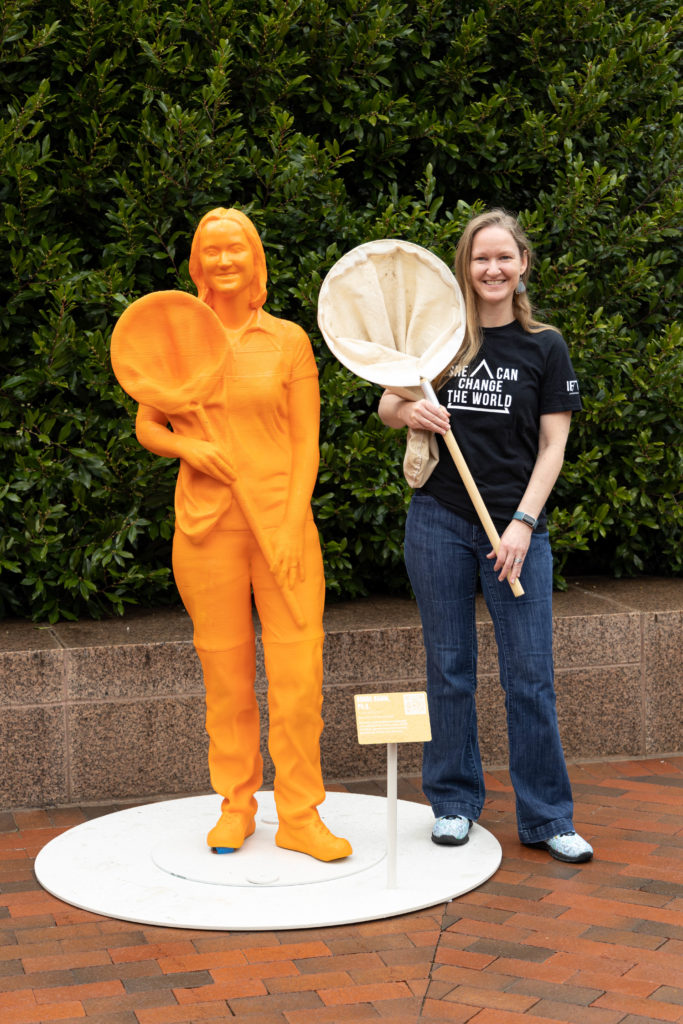 What was the most memorable part of the opening weekend of #IfThenSheCan – The Exhibit?

Dr. Jones: The most memorable part of the opening weekend was being able to engage with the public and encouraging young girls, and even the adults, to pursue STEM careers regardless of the barriers and challenges that present themselves. I especially felt the joy from the kids who ran up to my statue, asked me about the brain, and told me what they were learning in school. I decided to keep things exciting by having them wiggle or dance on the spot to demonstrate the mind-body connection and how neuroscientists study that connection. 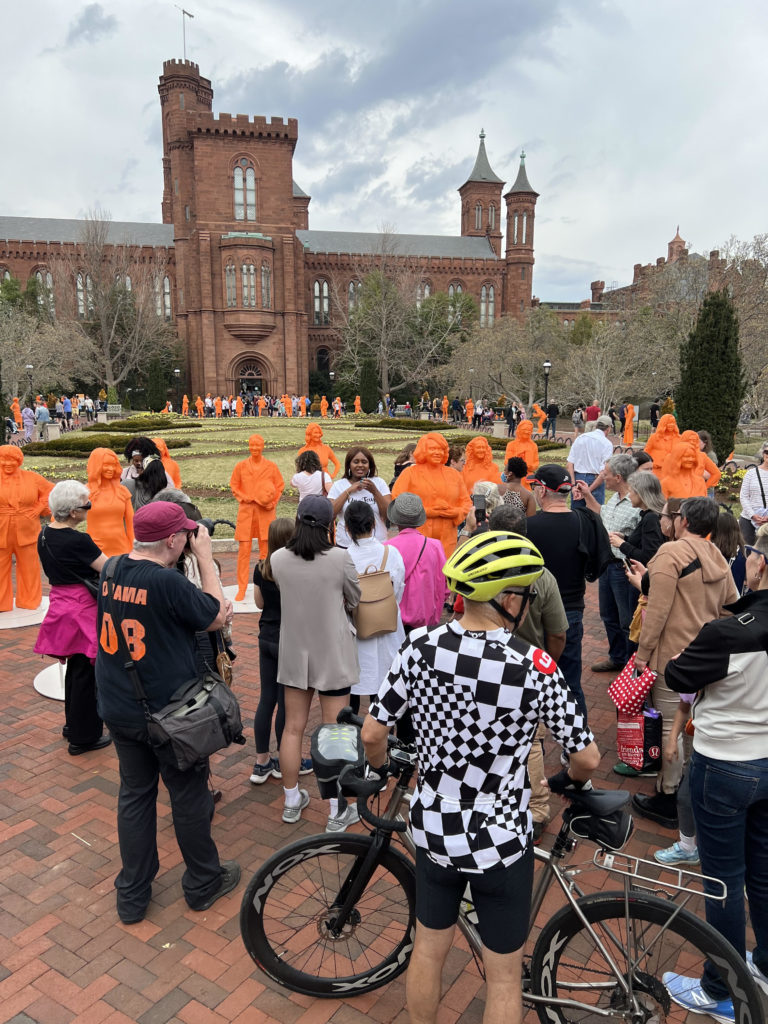 Dr. Hamm: I agree, the people were the most memorable part. There were three interactions in particular that stood out. One was a woman who walked up to me and placed her hand on my shoulder and simply said, “Thank you.” It was such a touching moment that I asked if she’d take a photo with me so I could remember it. The other was the thank you note I received from a Girl Scout. The entire experience was so overwhelming in an absolutely positive way. The people I talked with were so supportive and had such engaging questions that they inspired me – and validated that experiences like this need to happen. I’d be remiss if I didn’t also say that having my husband there to see it and share the moments with me was memorable.

Which question were you asked the most?

Dr. Jones: I was asked many questions, but the questions that I enjoyed the most were in reference to perseverance as a Black woman in STEM. I am still in disbelief that the little Black girl from Virginia (me), who talked too much in her middle school science class, earned her Bachelor’s and Master’s at Virginia State University (an HBCU), and then later became the first African American to earn a Ph.D. from the Department of Biomedical Sciences at Florida State University, could eventually serve as a global role model in STEM and have a statue placed at an exhibit down the street from the White House. I often reflect on constantly being the only Black woman sitting at the table. It takes a lot to stay motivated in careers that lack diversity when you are unable to visually see representation of yourself in those spaces. Nevertheless, I encourage everyone to understand that if that one person – whether it is you or someone else – doesn’t take that journey alone, and lift others while there, change may never occur.

Dr. Hamm: My most frequently asked question was “Do you get to keep your statue?” Honestly, I don’t know what will eventually happen to the statues, but I shared that I have my own mini version of the statue that the AAAS If/Then team sent us. I happened to have it with me and showed it to people. I also took photos of my mini statue with the National Monument and the National Museum of Natural History, which is where my statue will be located from March 7-27. 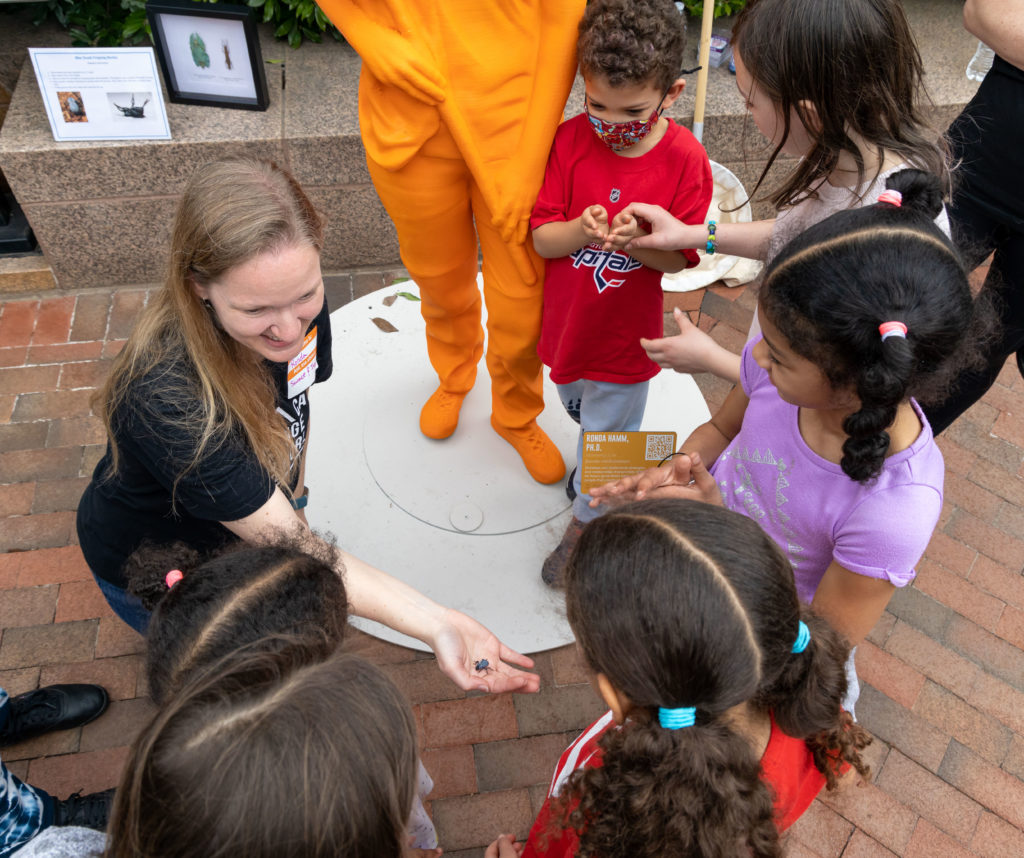 Another question that was frequently asked was, “What is an entomologist?” On Sunday, I had some insects with me so that day the question was, “What is that you’re holding?” The insect, a Blue Death Feigning Beetle, led to conversations about how insects survive predation. These particular insects play dead, so I had the participants give me their best “playing dead” face. And yep, my “playing dead” face made it onto social media!

What was your reaction when you saw all the statues at the Smithsonian?

Dr Hamm: So many emotions came crashing down all at once. There was awe, shock, honor, pride, disbelief… and a little imposter syndrome (I’m still working on that at times). I have met many of the women represented, and I’m so proud of all they have accomplished. I can say that I’m a fan of every single woman who earned her spot in this exhibit and the amazing work they do. I’m proud to have them as my sisters in STEM!

Dr. Jones: It was a powerful moment seeing the statues at the Smithsonian. Washington, DC is the location for change. If there are issues with policies, people go there! If someone has something to say, they go there! Seeing the statues at the Smithsonian is a bold way of shifting the culture to accept and establish normalcy around women in STEM careers. Lyda Hill Philanthropies® and the American Association for the Advancement of Science (AAAS) have taken on the courageous task of exposing middle school girls to their STEM potential. As a result, so many other individuals have been positively influenced by this movement as well.