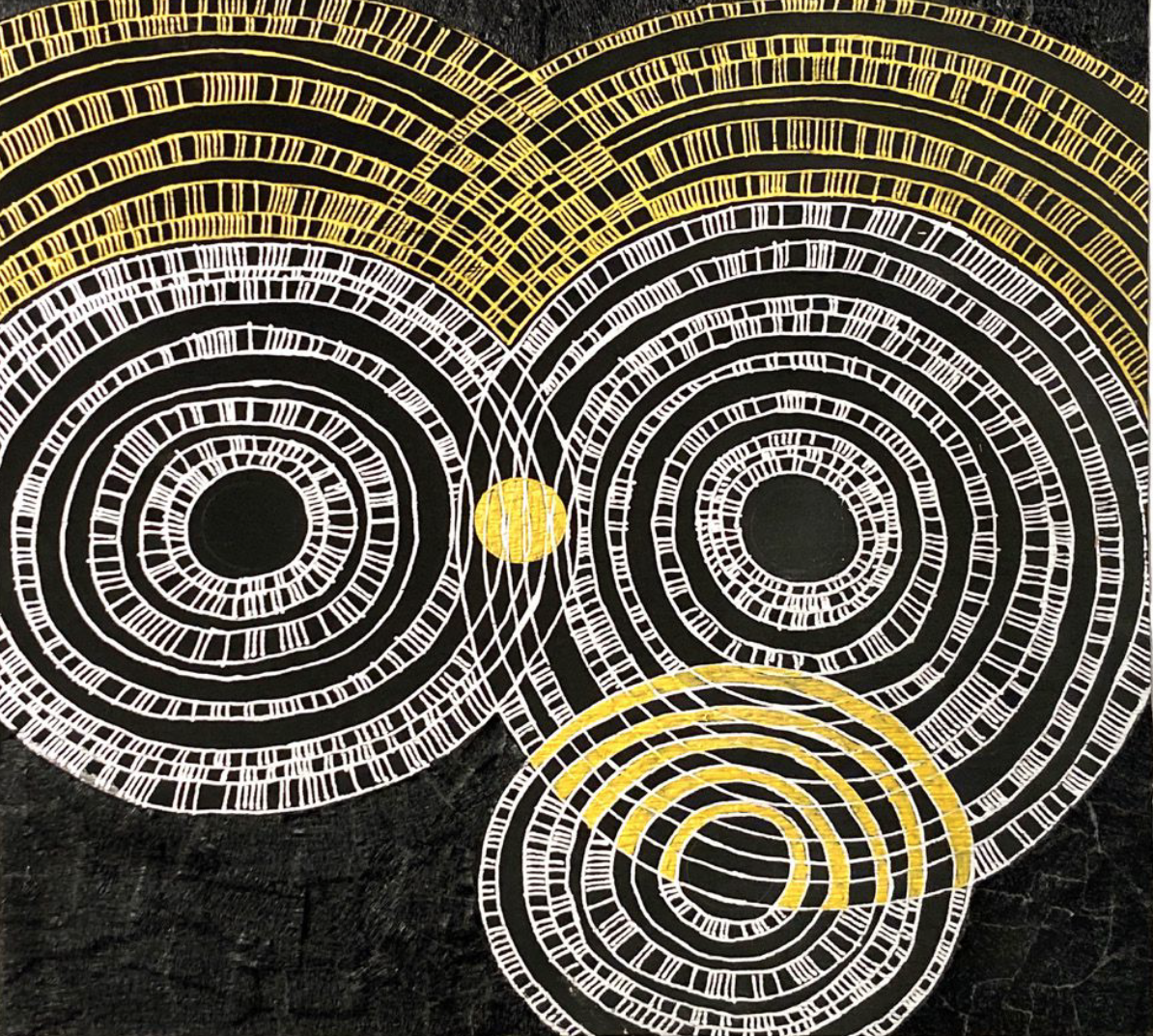 The Melding of Science and Art

When I first learned about The Art of a Scientist, a collaborative art exhibit started in 2018 by three biomedical PhD students at Duke University—Dr. Ariana Eily, Dr. Casey Lindberg, and Hannah Devens—I was fascinated by the beauty that is created when scientists and artists pair up (see image 1).

“We often hear about the stark differences between art and science, that some people are analytical while others are freethinkers, with little room to mix,” according to the exhibit founders. “In reality, artists and scientists actually have a lot in common. Scientists often spend hours taking, creating, and editing beautiful images, figures, and videos, in the same way an artist labors over a new idea or piece. Both are seeking to capture truths about the world around us.”

Image 1. “Spheres of Influence,” from the Art of a Scientist: Bridging the Gap 2021, online exhibition zine. Artwork by Chris Sancomb and Arielle Fogel

Indeed, while science and art are often portrayed as polar opposites or as mutually exclusive, they actually have fundamental similarities that make them compatible, despite their apparent differences. Because of their synergy, the two fields have melded over time to become known as “SciArt” — or #SciArt, a popular hashtag linking together a vast online world of creativity.

Individual scientist-artists have existed since the beginning of science and art. Leonardo Da Vinci (1452–1519), who painted the Mona Lisa and sketched the Vitruvian Man, famously studied human anatomy through dissection and drew designs that predicted modern inventions like the helicopter. There were women as well—Maria Sibylla Merian (1647–1717), for example, who was an acclaimed botanical artist before becoming the pioneer naturalist who described insect metamorphosis.

Today, you don’t have to look far to find individuals fusing science and art in creative ways and sharing their work with the public. When I met Teddy Devereux at the 5 Points Gallery in downtown Durham, NC, I could not take my eyes off of her fused-glass sculptures (see image 2). They reminded me of cellular structures, even before I found out that Devereux is a biologist herself. She was a research biologist at the National Institute of Environmental Health Sciences (NIEHS) from 1971 to 2004, before leading the Molecular Toxicology Group in the Laboratory of Molecular Carcinogenesis, now the Epigenetics and Stem Cell Biology Laboratory at the NIEHS, until her retirement.

“One of the first images that drove me to science was seeing an onion root-tip section under the microscope,” says Devereux. “I see the beauty in science all the time. I’m challenged in a good way, sometimes to create an artwork based on a scientist’s research, and sometimes I just see something that inspires me to make a piece so that others can see what I love.” 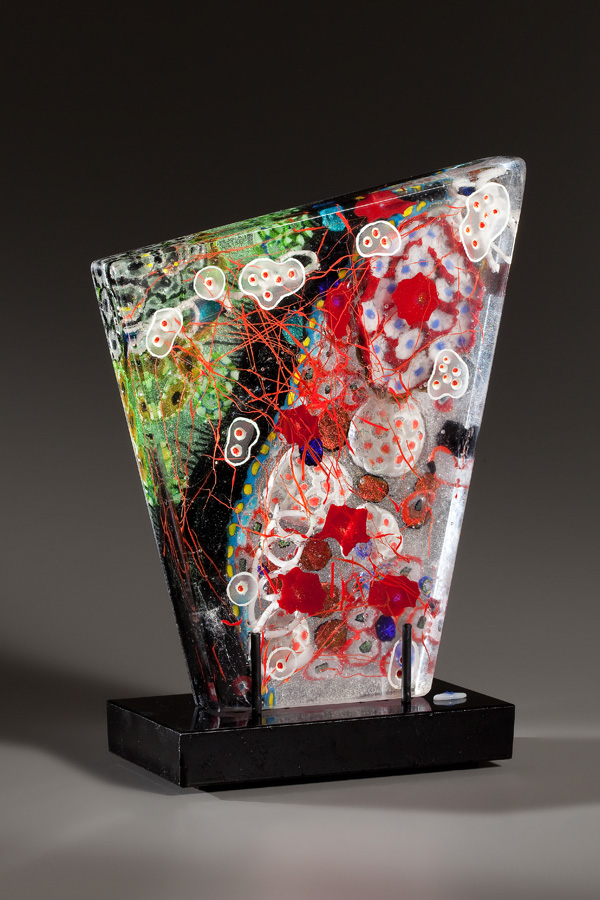 Beyond the creativity of individual scientist-artists, there is a broader movement to integrate science into artistic spaces. Many universities arrange exhibits similar to “The Art of a Scientist” and offer academic programs focused on SciArt, such as Art of Science at Princeton University and Art + Science at Stanford University.

On a national scale, there is the SciArt Initiative, a nonprofit that promotes the convergence of the arts, sciences, and technology. Founded in 2014 by Julia Buntaine Hoel, a conceptual artist with training in neuroscience, the SciArt Initiative recognizes the fundamental similarity between science and art: both are fields driven by humans endeavoring to build models to understand the world and ourselves. The SciArt Initiative puts on regular art exhibits and public events in New York City, Boston, and beyond. They further build a community by interviewing science and art practitioners and by helping them network.

The integration of science into art may be gaining newfound attention, but art has always been integral to scientific communication, from the art of crafting precise language to visualizing data and abstracting concepts. Fresh-off-the-press scientific publications not only use graphs to summarize experimental data but also often use figures to illustrate theoretical models.

On the covers of the journals publishing these scientific papers, there is room for creativity, and artists are taking advantage of this space. Sometimes a figure from a paper makes it onto the cover, but other times the cover art is an abstract representation that is nonetheless enlightening. An example is this drawing, created by S. Monroe for Trends in Endocrinology & Metabolism, volume 33, issue 3 (See image 3), which shows juvenile microglia consuming fatty foods like pizza and fries while playing an arcade game where lipids invade and trigger warnings for inflammatory responses. The illustration captures the essence of the brain’s immune response to dietary fat during development, as discussed by a paper from Monroe’s lab in the journal issue.

Image 3. “Microglia at the Arcade,” from the Trends in Endocrinology & Metabolism Journal, cover, volume 33, issue 3. Illustration by S. Monroe.

“An experimental result can only impact an audience that understands it; the ability to communicate science to a broad audience is critical if we want our research to impact society,” says S. Monroe, whose freelance graphic-design work converges with their career as a neurobiology PhD student at the Staci Bilbo Lab at Duke University. “I find that even amongst other scientists, there is greater appreciation for research that is presented in approachable ways.”

Another style can be seen in a drawing Dr. Beata Edyta Mierzwa made for The EMBO Journal, volume 39, issue 8 (See image 4). A graceful dancer is on her way to pluripotency, a state where stem cells are capable of developing into any type of cell or tissue. Pluripotency is illustrated by a traditional Chinese ruyi, a decorative object, here standing for “as one wishes.” The dancer has two fans in hand, which represent two biological processes that synergize to create stem cells, EMT (epithelialmesenchymal transition, which gives the cell the ability to migrate and proliferate) and OGS (glycolysis, which changes the cell’s energy metabolism). All around her are the names of the molecular players in the two processes.

As new research becomes textbook material and reaches a larger audience, the illustrations enhancing this research remain essential. Almost everyone remembers a few striking diagrams from the science textbooks of their youth. Some of these illustrations even go viral in Facebook Groups dedicated to strange-looking scientific diagrams. These images are memorable because of their humor, but their humor often marks their success in educating their audience.

In all seriousness, art plays a crucial role in communicating scientific concepts and data. Many scientists invest in art as part of their scientific-communication tool kit. Indeed, the National Institutes of Health has a Division of Medical Arts dedicated to graphic design, medical illustration, and graphic production. 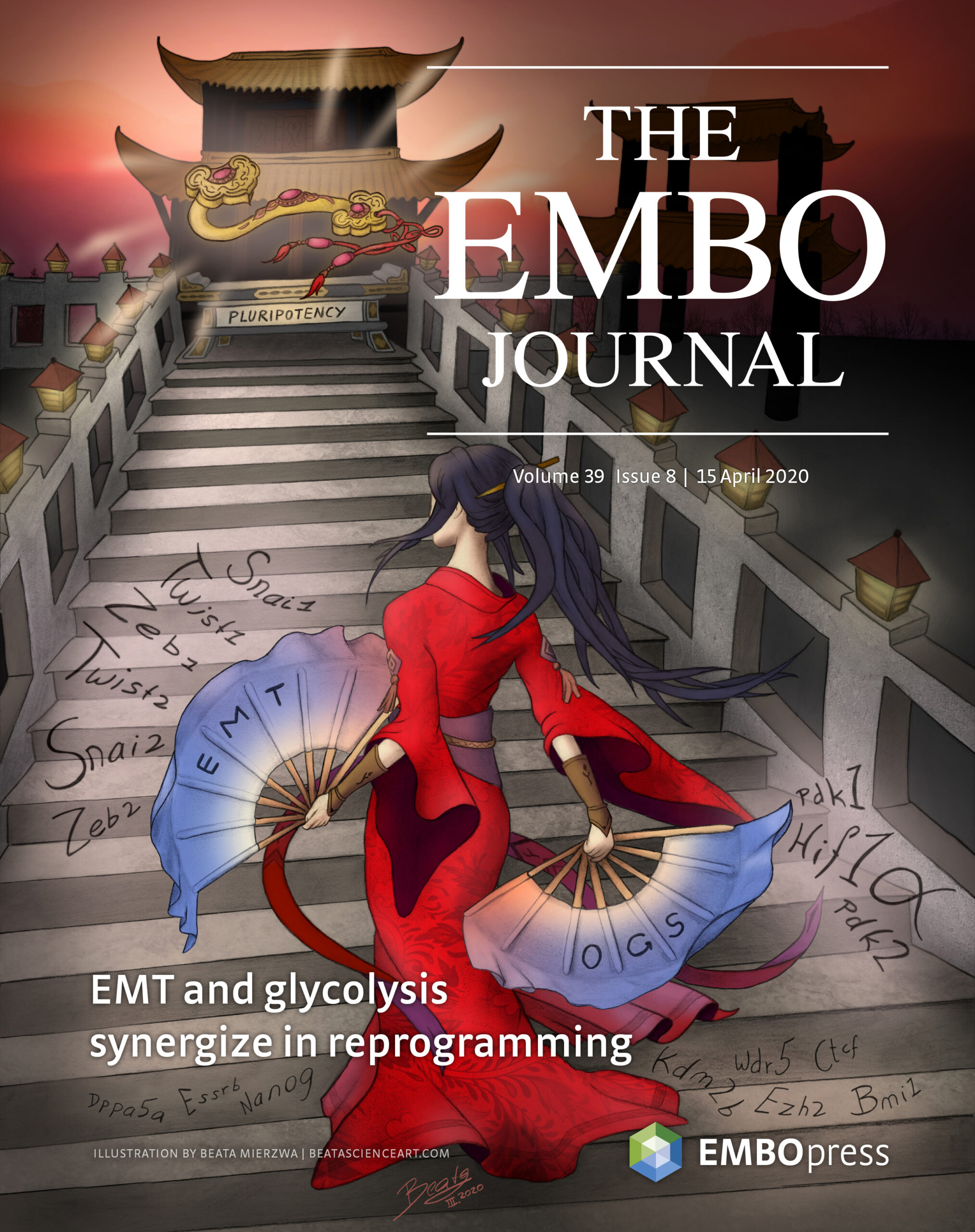 “Experimenting with creative approaches to science communication has transformed the way I present and even think about my research,” says Dr. Mierzwa. “Creating illustrations for both my own and other people’s research has broadened my ability to translate the essence of complex scientific concepts into intuitive visuals. It has been amazing to see how using metaphors to explain complex material has helped spark genuine interest and fantastic scientific questions from people of all ages, and it has developed into a mission to inspire our next generation of creative scientists.”

As science and art intertwine in galleries, journals, and textbooks, their combined influence further bleeds into pop culture. Art makes science beautiful—but also fun and cute. GIANTmicrobes plush toys have taken over homes, classrooms, science professionals’ offices, and laboratories. Science imagery, such as graphics related to anatomy and cellular structures, is printed onto cross stitch patterns sold on Etsy. Clothing brands like Princess Awesome & Boy Wonder enable us to literally wear our scientific interests, whether it is a dress adorned with the digits of pi or a necklace whose pendant contains the chemical structure of such neurotransmitters as dopamine, serotonin, or acetylcholine, representing love, joy, or learning.

Besides decorating commercial accessories—in a way that may reflect the increased approachability of science and a decreased association of science with masculinity—SciArt in pop culture can also directly raise social awareness of both science and scientists. Microscopya, a video game created by Dr. Mierzwa, invites players to explore the beauty inside our cells. JKX Comics, created by Dr. Jaye Gardiner and colleagues, explores scientific phenomena, cutting-edge research—and hidden figures in STEM. 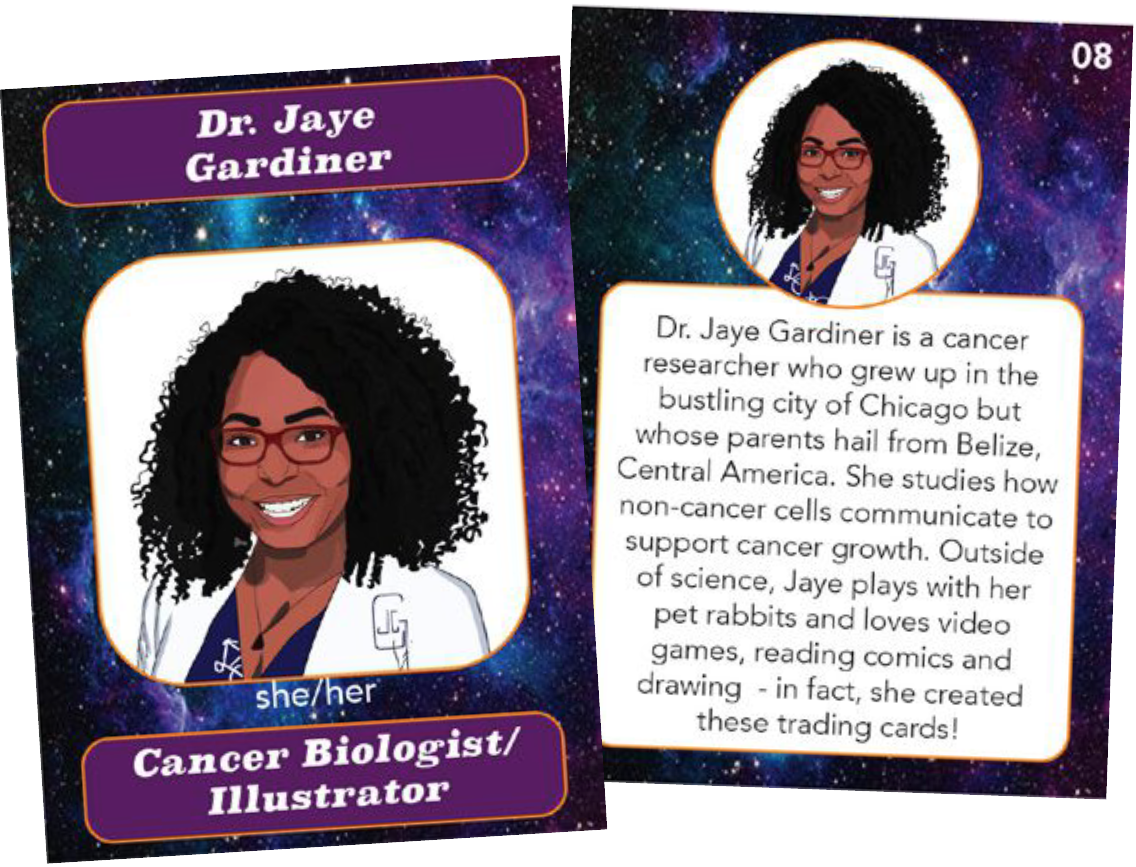 “Part of the reason that I chose a visual medium for my science communication is because of the power the arts have in making the invisible visible. [Whether my artistic focus is on] the microscopic world, entities from far-away galaxies, or the unsung workforce that drives our science and technology forward, my comics and illustrations allow me to show the diversity that exists within STEM,” says Dr. Gardiner. The diversity in the STEM workforce is especially highlighted in Dr. Gardiner’s scientist trading cards (See image 5). They make the powerful statement that each scientist is unique and that anyone can be a scientist.

Contemporary SciArt defies the perception that science and art are incompatible. Practitioners use SciArt to capture artistic beauty, to communicate scientific concepts, and to raise visibility for social issues surrounding science and art. They do not merely combine science and art; they make science and art synergize to convey powerful messages. As SciArt permeates art galleries, scientific publications, and pop culture, hopefully more of us can appreciate and wield this incredible tool. 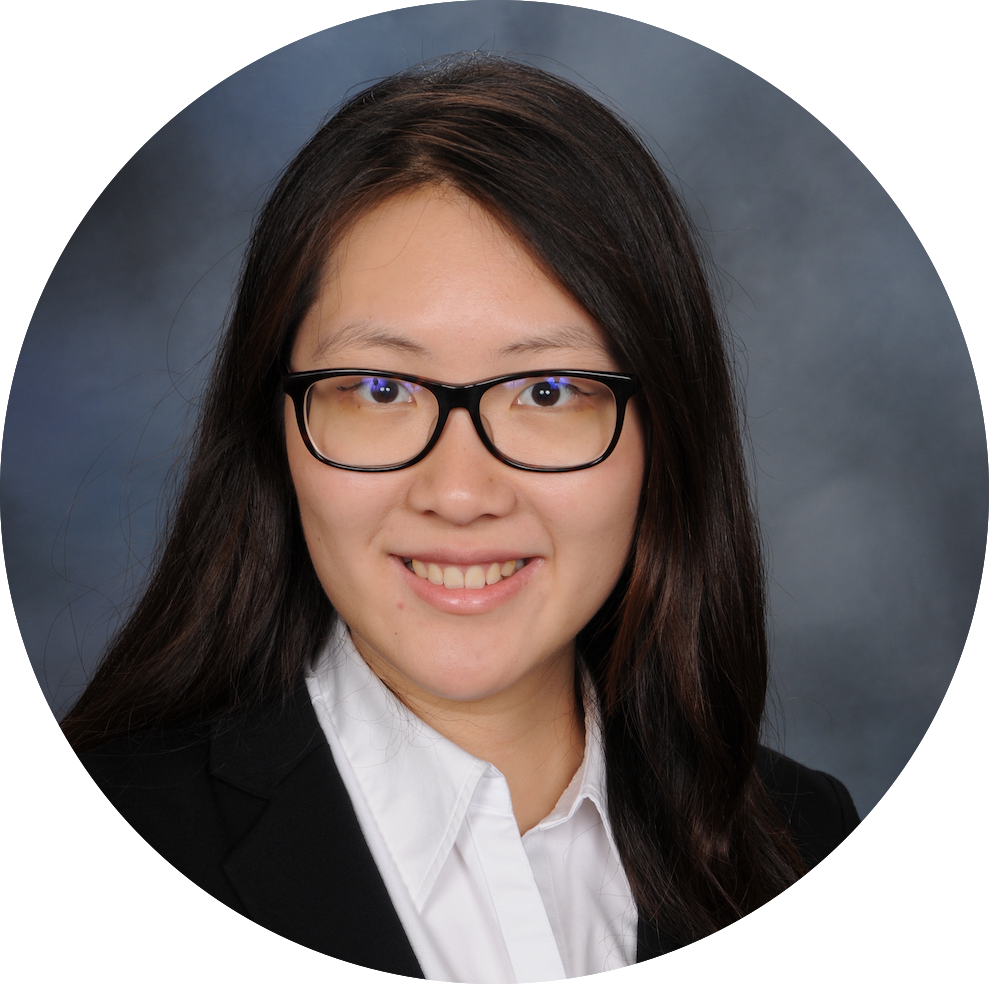 Yanting “Raven” Luo is a PhD student in the University Program in Genetics and Genomics at Duke University. She does research in evolutionary genomics and is passionate about science communication.