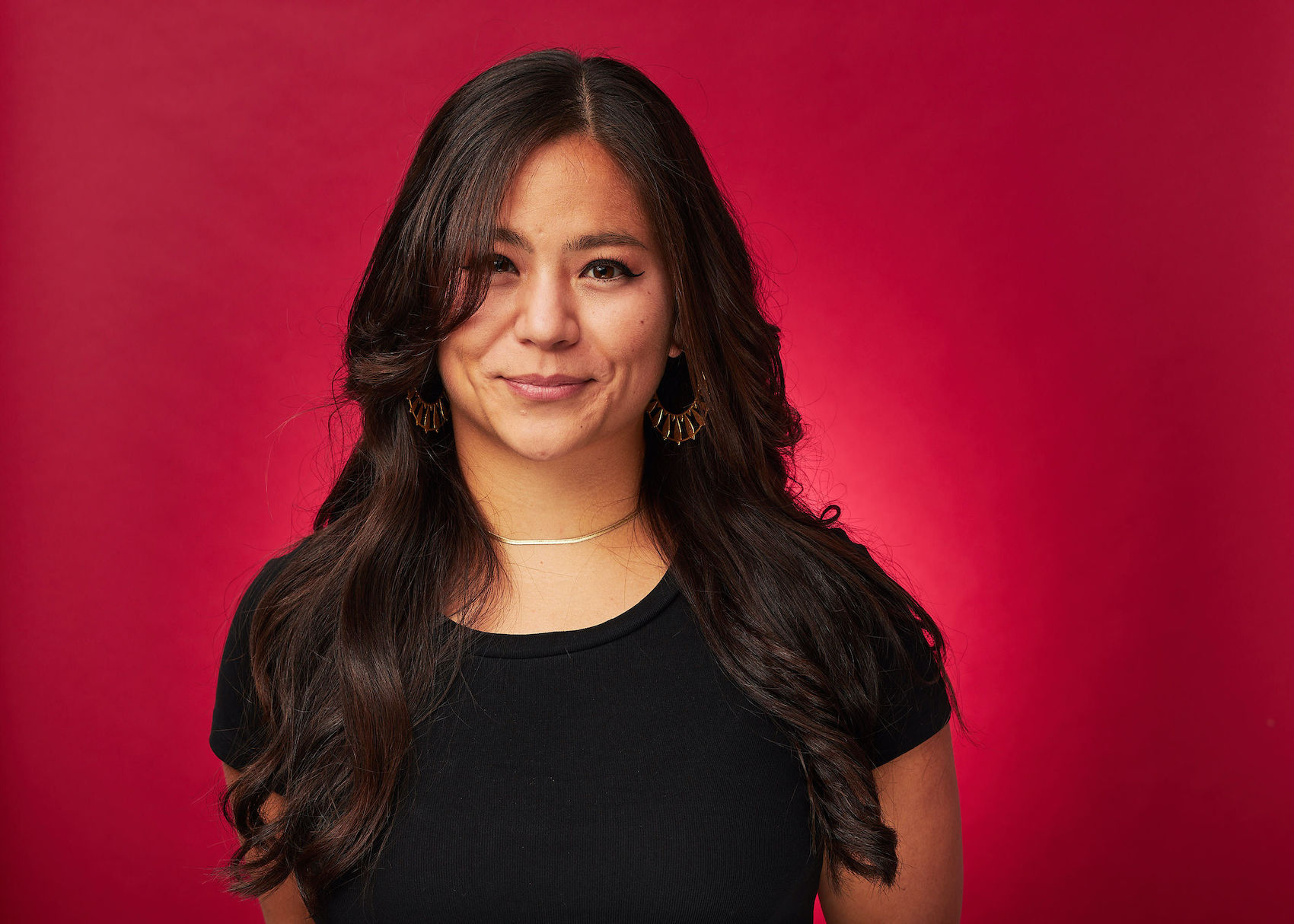 Career as Crucible: How Identity and Solidarity Shape my Experience as a Woman of Color in Science

As a mixed-race Japanese-American woman, my entire life has been an exercise in navigating and reclaiming spaces that were not built for me.

From a very young age, I lived with the awareness that only fifty years before I was born, my grandparents, who were both Americans, were illegally imprisoned by the United States during World War II simply because of their Japanese heritage. I grew up in a primarily white neighborhood in the suburbs of San Francisco, and often felt like the odd one out in my social groups. My peers made me acutely aware that the dried nori I brought to school was weird, that I looked weird, that my last name was weird. Like many other Asian-Americans have experienced, life taught me early on that I was different.

However, looking back, the sense of otherness that permeated my family and personal history was foundational in my approach to science, my career, and supporting other women scientists and scientists of color. Being othered at every stage of life, in every sector of my life, has had two significant effects: a heightened sense of empathy, and a healthy skepticism of authority and the status quo. Both, I believe, have ultimately made me a stronger scientist.

My sense of feeling like a constant outsider, paired with my natural curiosity and love of learning about the natural world, probably made me a prime candidate for becoming a scientist. With science, I learned that asking questions and thinking differently fueled progress. A pivotal moment for me was taking Advanced Placement Environmental Science in high school and discovering the intellectual high of learning about real issues like climate change and environmental contamination. For the first time, I understood, at least partially, the environmental issues that I saw reported on in the news. As a teenager, that was a very powerful feeling; I was hooked.

I had the first reality checks of my science career as an undergraduate studying public health at U.C. Berkeley. My memories from that time are dominated by the feeling of being invisible, a little fish in a big pond. Sitting in the cavernous lecture halls, the professors — most of whom were white men — were literally and figuratively distant, seemingly in a world that I could not access. Because of this first formative experience of my career, I think I expected to always feel alone within science. Thankfully, I couldn’t have been more wrong. 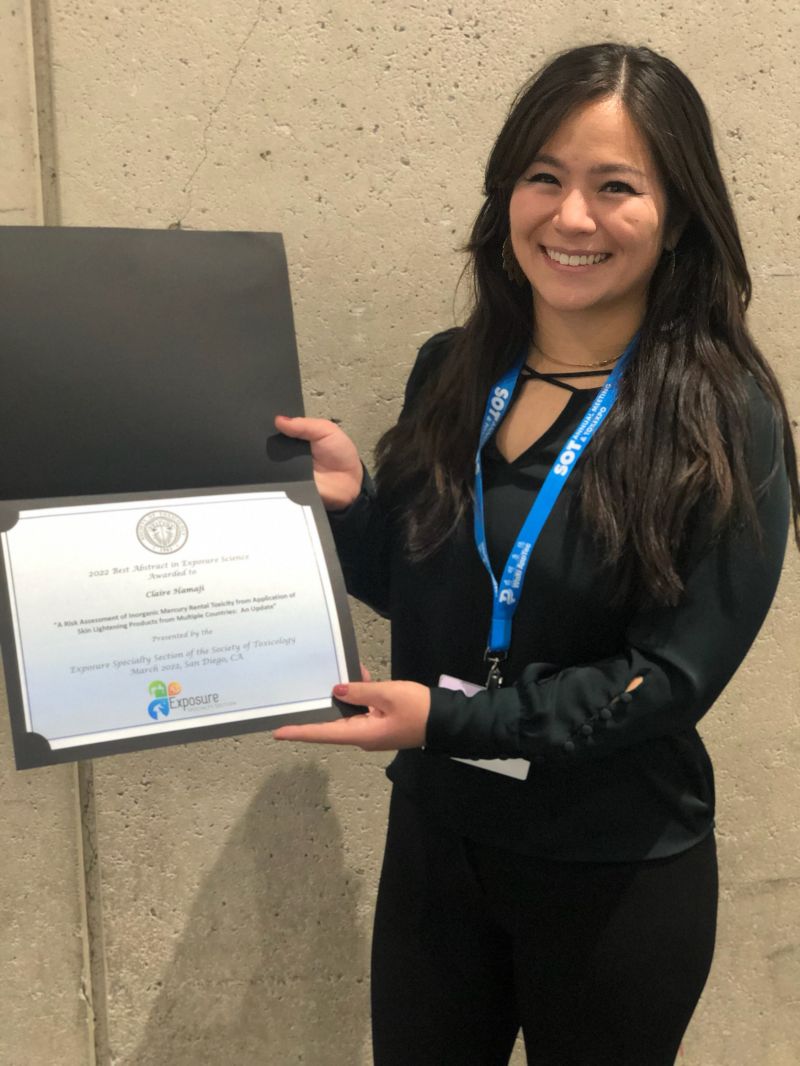 Claire accepting a certificate for Best Abstract, awarded by the Exposure Science Specialty Section, at the 2022 Society of Toxicology conference in San Diego.

At this point in my life, I’ve begun to reflect back on my career as much as I look ahead to meeting my current and future goals. One common theme stands out as to why I have been able to thrive within science: mentoring and solidarity with other women scientists and scientists of color.

Ever since I graduated from U.C. Berkeley, every step of my career has been influenced by women mentors and by colleagues with diverse experiences. As a somewhat naive intern at a huge environmental consulting firm, I relied on advice from a woman principal scientist, who gently coached me on how to make connections with other risk assessors in the company. With her help, I soon became integrated into the risk assessment team. I eventually became the right-hand woman for one of our best risk assessors, who also happened to be a woman. Both women taught me not only how to conduct the technical work of a risk assessment, but also how to find joy and humor in my work.

For my master’s program at Emory University, part of my scholarship package required that I find a work-study position. Through my job search, I learned about the Michigan Polybrominated Biphenyl (PBB) Registry, a research group led by Dr. Michele Marcus. The Registry’s mission is to characterize and communicate the extent of flame retardant exposures in people and the environment stemming from an industrial accident in Michigan in the 1970s. I was immediately drawn to the group, not least of all because it was led by a woman. I was ecstatic when I was hired as a graduate student researcher.

At the PBB Registry, I worked closely with women epidemiologists, program managers, biostatisticians, and geneticists of all different backgrounds. I loved being part of a women-led team that embraced diversity while doing science for the public good. Moreover, my supervisors always encouraged me to apply to scholarships and other opportunities that could boost my career, even if that meant I would eventually move on from my role with them. My experience with the Registry solidified my conviction that women of all backgrounds would continue to change the face of science.

Now, I work as a human health risk assessor at a consulting firm full of some of the most intelligent, compassionate, and toughest women I’ve ever met. It’s no accident that I ended up here. When I applied for the position, I flew from Atlanta to San Francisco to present my graduate research and interview with the staff. As I set up my presentation in the conference room, I was amazed to see what seemed like twenty women, plus just a handful of men, gather around the table. The office was also more racially diverse than others I had interviewed at, and I learned that most of the principal scientists in the office were women. As far as corporate environments went, this was a place where I could picture myself. To this day, the diversity in my office allows me to feel comfortable showing more of my authentic self at work.

As I continue to navigate working in science, I go forward confidently knowing that I belong in this field. Being part of a community of women in science has allowed me to realize the strengths that being different has granted me. I’ve realized that as women in science, we are as defined by our differences as we are by our shared challenges. Of course, things are far from perfect for us, and we’ll undoubtedly need to continue to advocate for ourselves and for each other for the foreseeable future. Still, I’m optimistic about the next generation of women scientists and scientists of color, who I hope will continue to benefit from the example of those with similar experiences. If the experiences that I’ve had in my career are any indication, we are, hopefully, headed in the right direction.

Claire Hamaji, MPH is a human health risk assessor at Cardno (now Stantec) ChemRisk, a scientific research and consulting firm based in San Francisco. Through her work, Claire characterizes human exposures to chemicals in a variety of unique scenarios such as cosmetics usage, wildfire smoke exposure, and workplace exposures. In her free time, Claire enjoys running around her neighborhood in Oakland, reading sci-fi and fantasy novels written by women of color, and singing Rage Against the Machine at karaoke. Claire has been an AWIS member since 2020.