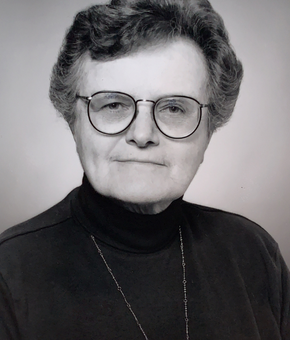 Dr. Neena B. Schwartz was born in 1926 in Baltimore, Maryland. After obtaining her undergraduate degree from Goucher College, Dr. Schwartz completed her PhD degree in physiology at Northwestern University in 1953. She began her career as assistant professor of physiology at the University of Illinois College of Medicine in Chicago and in 1957 became director of biological laboratories for Michael Reese Hospital’s Institute for Psychosomatic and Psychiatric Research and Training. She returned to the University of Illinois College of Medicine in 1961, serving as professor of physiology, assistant dean of faculty affairs, and professor of neuroendocrinology.

In 1973,  Dr. Schwartz joined the faculty of the Feinberg School. The following year she was named Deering Professor and chair of the Department of Biological Sciences in the Weinberg College of Arts and Sciences. In 1980 she founded Northwestern’s Program for Reproductive Research (now the Center for Reproductive Science), which became a premier training site for students and investigators in reproductive endocrinology. Dr. Schwartz has made many seminal contributions toward understanding the hypothalamic-pituitary-gonadal axis and its control. Her early studies on the rat estrous cycle established many of the basic tenets of cyclical changes in gonadotropin secretion upon which current views of the HPA axis are based. Dr. Schwartz’s interest in differential regulation of pituitary FSH and LH secretion led her to describe a nonsteroidal feedback factor from the ovary involved in controlling the secondary FSH surge, and her laboratory went on to make many important contributions to the study of ovarian inhibin.

She has been recognized by numerous awards and honors, including the Carl Hartman Award from the Society for the Study of Reproduction and election to the American Academy of Arts and Sciences in 1992. Neena was also President of the AWIS National Governing Board from 1971-1973, co-founding the Association for Women in Science and within the Endocrine Society founded Women in Endocrinology.

Dr. Schwartz published her autobiography, A Lab of My Own, in 2010. She used this book to come out as lesbian and encourage other women and gay scientists to persevere. One of the most quoted lines from her book recalls her early experiences in the workplace: “I was the only woman getting my PhD in the department of physiology at Northwestern. At my first job at the University of Illinois, the chairman of the department asked me to pour the tea. ‘Sure,’ I said, ‘but maybe someone else can pour it next time.’ Nobody ever asked me again.”

Consider making a donation to AWIS in Neena B. Schwartz, PhD's honor
Donate