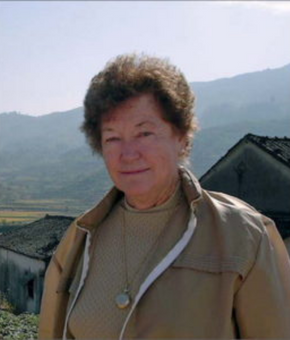 Dr. Joan Wright Goodman was a pioneering stem cell researcher, physiologist and tireless advocate for the role of women in science.

Joan Louise Wright was born and raised in El Paso, Texas, entered Barnard College in New York on scholarship at the age of 16, and graduated with a degree in chemistry before earning her doctorate from the University of Rochester. It was there that she met her husband, physicist Charles D. Goodman, and the couple later settled at Oak Ridge, where they remained from 1957 until they moved to Berkeley and the Lawrence lab in 1978.

Her scientific work earned her a major reputation as the first scientist to demonstrate that stem cells from bone marrow circulated in the peripheral blood of mammals — work that has been repeatedly cited in scientific journals and remains basic to stem cell research today, according to Dr. Charles Congdon, a physician and cancer researcher at Oak Ridge who was Dr. Goodman’s longtime colleague there. “Jodie’s work was really remarkable,” Congdon said. “She was an informal leader with a great deal of influence on her colleagues, and at many national and international meetings she shared the results of her work with clinicians who were treating patients.”

Dr. Goodman and her Oak Ridge colleagues were also distinguished for their research contributions to the study of bone marrow transplantation as a means of combatting the effects of radiation damage, and she contributed to early studies of the immune response in animal and human cells and the role of the thymus gland in the formation of red blood cells.

Although Dr. Goodman worked in the lab with great success, Congdon said, she was well aware that it was tough for most women to advance as scientists. “In those, days women in science were not given much consideration,” he said, “but Jodie kept reminding us all that women could do as well as men. She was really outspoken about that inequity in science, and she had a great influence on us all, including me.”

Her retirement in 1985 was occasioned by federal budget cuts for basic research in a number of long-established programs, particularly those led by older scientists. A woman noted for her energy and enthusiasm, Dr. Goodman entered law school at the University of San Francisco. Upon graduation from law school, she was admitted to the bar and focused on issues of biomedical patents and trademarks.

Dr. Goodman decided not to practice law and spent her remaining years as a dedicated patron of San Francisco’s ballet, opera, music and film communities as well as the Telluride Film Festival in Colorado, and the Telluride Chamber Music Film Festival.

Excerpted from the article written by David Perlman, Science Editor and published Thursday, July 13, 2006 in the San Francisco Chronicle