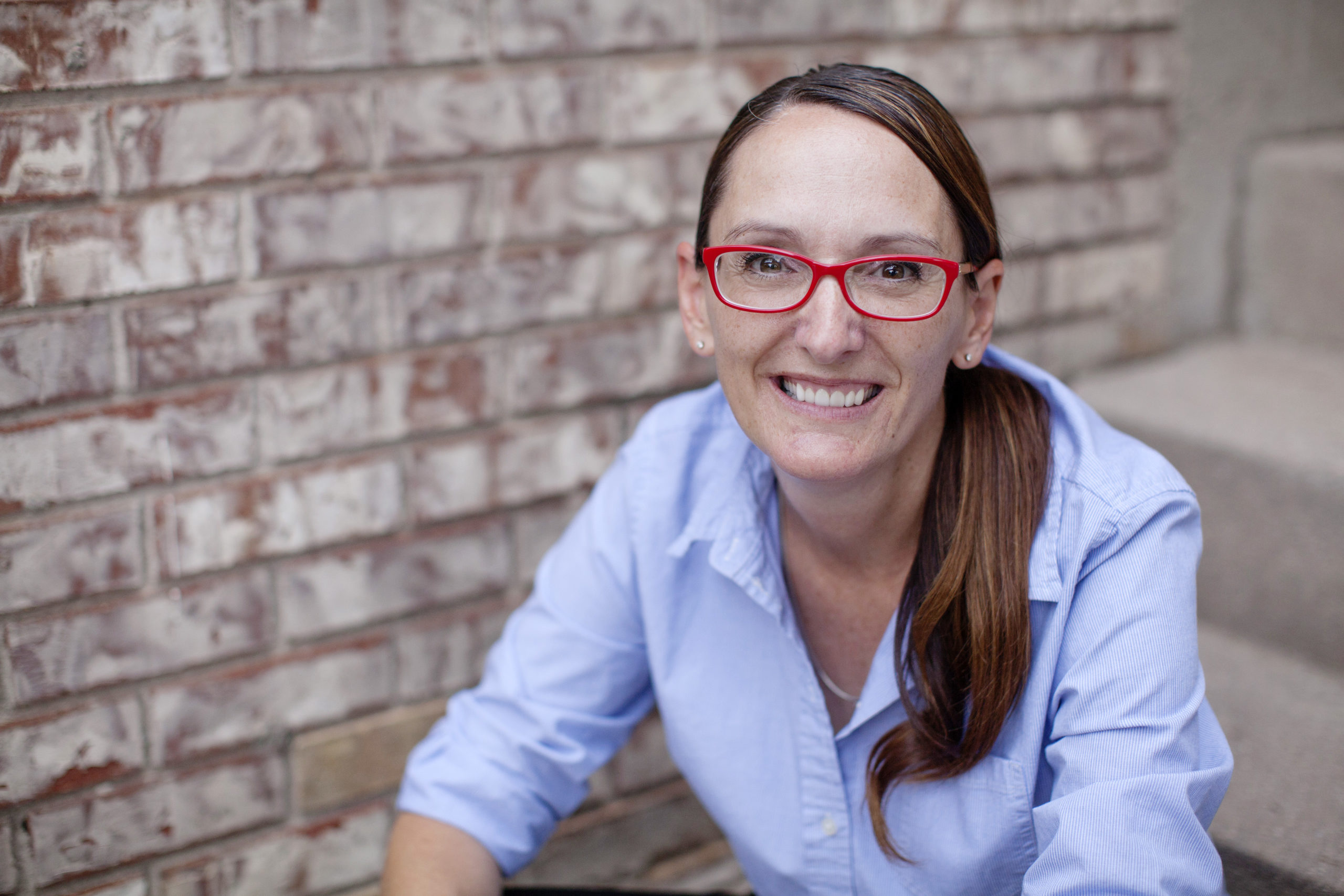 By Jessi L. Smith, PhD
Associate Vice Chancellor for Research and Professor of Psychology, University of Colorado
AWIS member since 2013

The “W” in AWIS stands for women. Our community knows that the collective “W” includes women of color, women from different socioeconomic backgrounds, women with disabilities, women who are caregivers, and women who are cisgender (when biological sex at birth matches gender identity), as well as those who identify as transgender (when biological sex at birth and identity are different), nonbinary, gender-fluid, and/or queer. Some of us have many of these intersecting identities, while some of us have none of them. We include everyone in our “W.” Indeed, we might even think of the “W” in AWIS as meaning “whole-person.” This is why AWIS is exactly the right community to dive deeper into improving the STEM experience for people who are LGBTQIA+.

Many people ask why the LGBTQIA+ acronym, and the community it describes, include so many identities wrapped up in all those letters. As a useful comparison, STEM may now be a well-known abbreviation for science, technology, engineering, and mathematics, but this wasn’t always the case. How many remember when it was just S and E? And now, some people talk about STEMM, adding in medicine, or even STEAMM, adding in art. The letters are a meaningful way to describe and create a coordinated community with shared goals and experiences. LGBTQIA+ stands for Lesbian, Gay, Bisexual, Transgender, Queer/Questioning, Intersex, and Asexual. The plus sign signifies the range of other sexual and gender identities not specifically represented. There is good reason for the community to be as inclusive as possible. Though society’s views of the LGBTQIA+ community have generally shifted in a more positive direction in the past two decades, there are still numerous laws, policies, and practices that silence, exclude, or outright discriminate against people because of their sexual or gender identity. 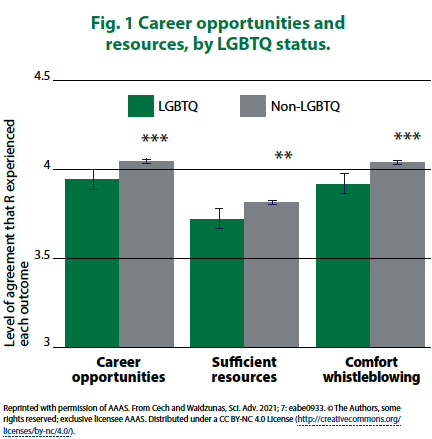 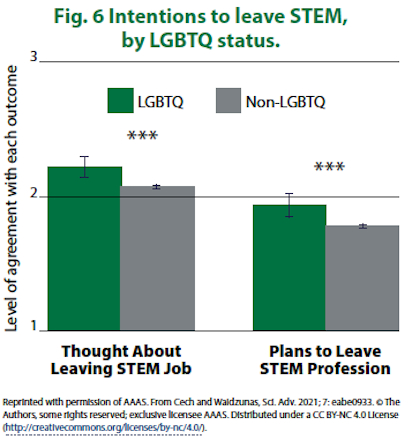 What do we know about our LGBTQIA+ community members in STEM? We know very little. This is largely because data are so difficult to obtain. Too often, human resources or institutional research offices require employees and students to choose from a binary male/ female identity, do not let them indicate a name other than their legal name, and do not ask about sexual orientation. Despite urgent requests for organizations to allow people to select an “X” as their gender marker, administrators resist by saying software prevents this option, or the choice would somehow make data analyses impossible. Similarly, policy writers are often reluctant to embrace the singular use of “they” as a pronoun because of their commitment to so-called “proper” grammar. This commitment may demonstrate that they care more about grammar than about human dignity, but that’s a battle for another time.

And why is it that employers and universities, when gathering demographic data, rarely ask us about our sexual orientation? How many of you have completed demographic forms that give you the option to document your sexual orientation? Many people in the STEM community and elsewhere might think that collecting such data is intrusive, violates privacy, or might offend someone. But if someone is offended by a question, they can choose not to answer. Not asking people if they would like to identify their sexual orientation sends a clear message that their identity is not valued, respected, or cared about.

There is something noxious in the hetero- and gender-normative STEM culture, which prevents our LGBTQIA+ scientists and engineers from participating as fully authentic ‘whole’ people. We could not have known this without asking.

As scientists, we must insist on access to data we can use to test our hypotheses, rule out explanations, and answer our questions. We cannot solve a problem that we cannot define. As Bryce Hughes, Assistant Professor of Adult and Higher Education at Montana State University, states, “The primary challenge is a resistance to including LGBTQIA+ demographic items on large surveys used widely for policy making and research.” His research was among the first to offer longitudinal analyses of LGBQ students in STEM majors in his 2018 Science Advances paper, “Coming out in STEM.” Hughes’s analysis found that students who identified as lesbian, gay, bisexual, or queer were 7% less likely than their heterosexual peers to remain in their STEM major over time.

This past summer a variety of organizations, including the American Association for the Advancement of Science, signed and submitted a letter to the National Science Foundation asking that sexual orientation and gender identity, or SOGI, be included in the 2021 National Survey of College Graduates. This was the second letter— the first was in 2018—to advocate that the NSF’s National Center for Science and Engineering Statistics (NCSES) consider collecting such data. The letter concluded: “In short, we cannot reduce disparities if we do not measure them. It has become clear that LGBTQ people, who comprise an estimated 4.5% of the U.S. population and 8.2% among early-career age individuals, are facing educational and career barriers in STEM fields. However, the lack of SOGI measures in NCSES surveys is hindering our ability to understand and address these barriers. Including SOGI measures in the 2021 NSCG and future NCSES surveys is paramount to resolving the challenges faced by the U.S. STEM workforce, while also highly feasible and with clear precedent in other federal agencies.”

NCSES was willing to pilot a survey that expanded gender identity measures in 2019 but did not include questions assessing sexual orientation. No one, it seems, wants to ask for this demographic information. But if we don’t ask, how can we tell what is going on?

Sexual orientation must not remain a taboo topic. Decades of research have shown the deleterious impacts of taking a “color blind” approach to race-related policy, laws, and practices. Similarly, we must avoid an “identity blind” approach. Until we are willing to acknowledge people’s sexual orientation and gender identity, we will not be able to create truly inclusive, diverse, and enriched STEM learning and working communities.

Until we are willing to acknowledge people’s sexual orientation and gender identity, we will not be able to create truly inclusive, diverse, and enriched STEM learning and working communities.

As Hughes states, “Some federal agencies that fund research on underrepresentation in STEM strictly define ‘underrepresentation’ based on statistics maintained by the federal government. However, if the data are not collected, the problem cannot be defined in terms that will result in research funding. Thus, resources cannot be made available for research to better understand LGBTQIA+ inequities, as well as how best to address them.”

When funding agencies do support data collection on LGBTQIA+ experiences in STEM, we learn a lot. Take the recent 2021 paper in Science Advances, “Systemic inequalities for LGBTQ professionals in STEM,” by Erin Cech of the University of Michigan and Tom Waidzunas of Temple University. They analyzed data collected from 25,324 full-time U.S. STEM professionals who are affiliated with one of 21 professional organizations: about a third were from academia, a third from industry, and the remaining third from the nonprofit sector, government, or K–12 education. Cech and Waidzunas provide compelling and statistically significant evidence that LGBTQ responders, about 1,000 people in their sample, suffer much greater inequalities compared to their non-LGBTQ peers.

The LGBTQ responders reported receiving fewer career opportunities for advancement and fewer resources to do their job well; greater discomfort with whistleblowing for fear of retaliation; and greater professional devaluation in the form of being held to higher standards, while also being treated as less competent. They also disclosed greater social exclusion, including the feeling that they were not fitting in; more written or verbal harassment on the job within the past year; and more health and wellness difficulties, including insomnia, stress from work, more frequent health problems, and depression symptoms. LGBTQ responders described greater intentions of leaving the STEM workforce: 22% of LGBTQ professionals said they had thought about leaving their job in the last month compared to 15% of their non-LGBTQ peers.

As Cech and Waidzunas reiterate in their paper, STEM culture is one that values objectivity and assumes that a scientist’s identities, including gender and sexual orientation, are irrelevant to merit. Yet, as their data and Hughes’s data so clearly point out, there is something noxious in the hetero- and gender-normative STEM culture, which prevents our LGBTQIA+ scientists and engineers from participating as fully authentic “whole” people. We could not have known this without asking.

We are fortunate to have a handful of professional STEM organizations willing to ask key questions about gender identity and sexual orientation to better understand STEM equity and participation, such as the American Physical Society, which released the informative “LGBT+ Climate in Physics Report” in 2016. But we cannot be satisfied with just a handful of organizations showing an interest in these challenges. We need to insist that our STEM community embrace gender identity and sexual orientation research with the same commitment that we give to other highly valued diversity work. We need to identify barriers, invest resources, and take action to develop innovative research and to test sustainable strategies that document and dismantle all inequalities in order to realize a thriving STEM workforce.

There is great promise for the future of STEM as more research is funded to understand and improve the LGBTQIA+ experience. Necessary data can only become available when agencies and organizations move beyond their reluctance to ask questions about gender identity and sexual orientation. The next time you are on a review panel, evaluating a paper, or part of a committee working on diversity issues in STEM, raise the question about gender identity and sexual orientation. After all, if we don’t ask, we can’t tell.

Dr. Jessi L. Smith is the Associate Vice Chancellor for Research and a professor of psychology at the University of Colorado, Colorado Spring. She uses she/her pronouns and identifies as a lesbian. She received her PhD from the University of Utah in 2002 and is a motivation and diversity scientist with roughly 70 peer-reviewed publications and more than $7 million in grants, supporting research on how to change social psychological aspects of situations in ways that improve academic and workplace experiences for historically marginalized people, especially in STEM fields. She is a mom, partner, animal lover, country music fan, and avid hot-springs soaker.