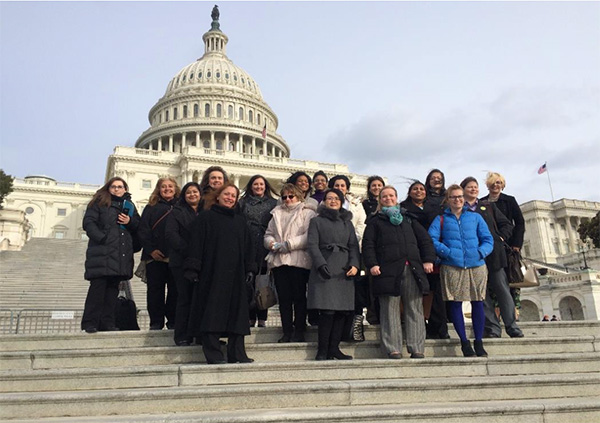 Washington, DC, March 15, 2018 – Association for Women in Science (AWIS), together with The Society of Women Engineers (SWE), is participating in the annual “Diversity and Inclusion Fuels Innovation in STEM” Capitol Hill Days, on March 14 and 15, 2018. During the two-day advocacy event, 21 AWIS members will meet with the offices of seven senators, and over a dozen members of the House of Representatives, from both political parties. AWIS members joining today’s efforts are from the District of Columbia, Florida, Maryland, Massachusetts, New Jersey, New York, Virginia, and West Virginia.

“It is time to level the playing field across all STEM disciplines. AWIS research shows there still are deeply rooted systemic problems, inequalities and disparities that significantly impact women in the STEM industry”, said AWIS Executive Director and CEO, Janet Bandows Koster, who is participating in the Capitol Hill Days, “We are pleased to have the opportunity to speak with members of Congress in our continued efforts to advocate for scientific research, inclusion and equality in STEM fields.”

This year’s AWIS advocacy event will focus on the need to increase funding and equal representation in STEM, with an emphasis to support The National Science Foundation (NSF), The National Oceanic and Atmospheric Administration (NOAA) and The Environmental Protection Agency (EPA). These agencies play a vital role in cutting edge basic and applied research, provide support to small businesses that drive innovation, and identify and address health and environmental problems facing the nation. The administration has proposed cutting over three billion dollars in the 2019 federal budget for these three agencies combined.

AWIS also advocates for equitable representation of women and people of color in federal research and programs, by extending its support for H.R. 1358/S.338 Scientific Integrity Act that creates requirement for federal scientific agencies to openly communicate their data to the public, policy makers and other federal agencies. AWIS further supports H.R. 3397 Building Blocks of STEM Act that supports STEM education and takes steps to address gender disparity of women in STEM, by directing the NSF to fund programs that address this need.

About AWIS: Founded in 1971, AWIS has been the leading advocate for women in science, technology, engineering, and mathematics (STEM) to achieve business growth, social change, and innovation. We are dedicated to driving excellence in STEM by achieving equity and full participation of women in all disciplines and across all employment sectors. In addition to scholarships, AWIS provides career resources, professional development, as well as networking, mentoring, and volunteer opportunities to build leadership skills. To learn more, visit awis.org and @AWISNational.